The vaping “epidemic” has made many headlines over the last few years, starting with the dramatic increase in experimental vaping by high school students and last year due to the EVALI health crisis (e-cigarette or vaping product use-associated lung injury). The CDC has since concluded that EVALI was connected to the use of THC-containing liquid—not nicotine or tobacco products. While EVALI is commonly referred to as a vaping-related crisis, none of the proposals examined in this post address the driver of EVALI. Instead, they focus on nicotine and tobacco products.

Last month, a small majority in the House of Representatives approved a measure that bans all flavored tobacco and vapor products and imposes an excise tax ($50.33 per 1,810 milligrams of nicotine) on nicotine (unless that nicotine is an ingredient in an FDA-approved smoking cessation product). Prior to this, President Trump signed into law T21, mandating that tobacco products cannot be sold to or purchased by anyone under the age of 21.

Naturally, there is also a lot of activity in the states, where several are looking to both limit flavor choices and introduce or increase taxes. This blog post will go over proposals in California, Colorado, Maryland, Michigan, New Hampshire, Utah, and Virginia.

In the 2020-2021 budget, there is a proposal to impose a new, additional tax to the existing vapor tax. Currently, California taxes 59.27 percent of wholesale cost. The new tax would add $1 per 20 milligrams of nicotine in a product. Governor Gavi Newsom (D) proposes that revenue from the new tax should be allocated to a fund and be spent on enforcement, youth prevention, and health care. Taxing based on nicotine content is problematic as it leads to non-neutral treatment of several nicotine products.

At the same time, California is looking to ban all flavored nicotine and tobacco products, which could have significant unintended consequences in a state with rampant in-flow of non-California-duty-paid cigarettes.

There are at least nine ballot initiatives in circulation seeking to increase tobacco taxes. The measures differ on whether they designate to earmark the revenue for a specified program. Appropriating revenue raised from vapor taxes to fund government programs related to the negative externalities associated with vaping can be sound tax policy, but collections from excise taxes on nicotine products should not be considered stable—excise revenues seldomly are—and the market is both young and volatile.

While they differ slightly with rates ranging from mid-twenties to sixties, they all share a flawed design. They all propose taxing based on product value. Taxing the value of a good limits consumer choice and product quality as it incentivizes manufacturers and retailers to reduce prices to limit tax liability. It also incentivizes downtrading, which is when consumers move from premium products to cheaper alternatives. Downtrading effects do not reduce harm and have no relation to any negative externality proponents of the tax claim it captures.

Colorado also has a bill to ban all flavors from tobacco and nicotine products.

HB732 would impose a wholesale tax on vapor products at a rate of 86 percent—higher than almost all other states with vapor taxes. The bill would also allow local governments to add additional taxes on tobacco products—currently not allowed in Maryland. In addition to these two provisions, HB732 imposes a one-time floor tax—an excise tax on existing stock—in fiscal year 2021. The floor tax itself is highly problematic for small businesses. Dedicated vape stores typically only carry vaping products, and a floor tax risks bankrupting them as they have no other inventory to secure cash flow. According to the bill, at least $22 million of collected revenue should be spent on cessation efforts.

Maryland also has a proposal to ban all flavors. Around 55 percent of Maryland smokers consume flavored products, and a blanket ban could have significant consequences for both revenue collection and smuggling. 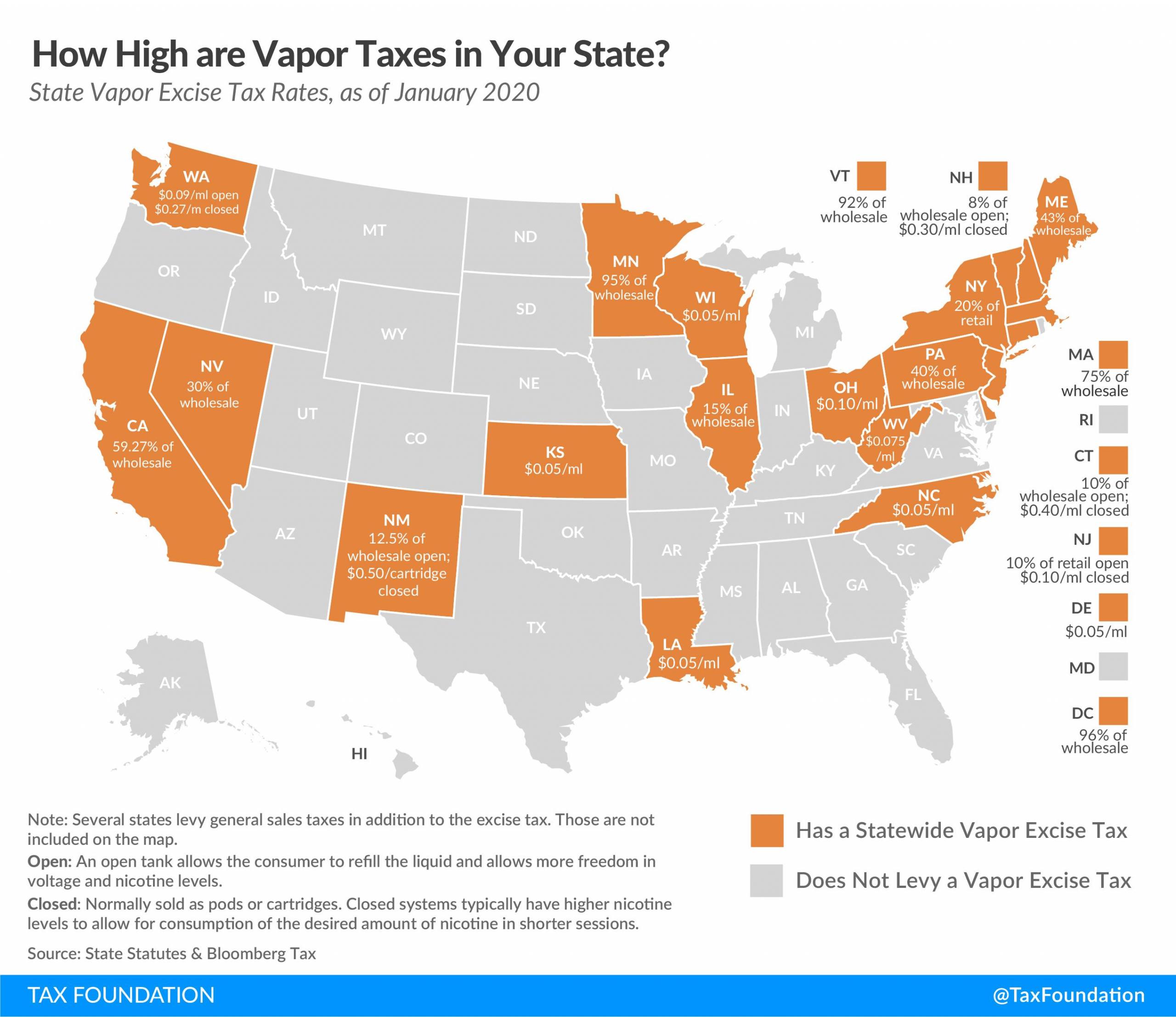 Michigan’s SB781 would, if enacted, levy a tax of 24 percent on consumable materials used in vapor products. The revenue would be allocated to Michigan’s general fund. While the rate is significantly lower than in the Maryland and Colorado proposals, it shares the design flaw of levying the tax based on price as well as defining vapor products as tobacco products. In addition to the points already raised, a price-based tax regime ignores the virtue of equitable taxation. If a tax aims to limit harm caused by a given product, such a product of similar quality and in similar quantity should have equal tax liability regardless of design or price.

The House approved HB1699 in early March. This bill would, if enacted, change the design of the current tax structure and increase tax rates. Currently, New Hampshire taxes vapor products in a bifurcated system, with an 8 percent rate on open systems (refillables) and a tax of $0.30 per milliliter on closed cartridge systems. HB1699 would convert this bifurcated regime into a 40 percent tax. Unfortunately, this a change for the worse. While the current system is not perfect, it does tax some of the products at a specific, simple, and neutral rate. Moving to a price-based tax for all products will result in a more complicated and less neutral tax system without achieving the stated goal of limiting risks associated with vaping.

SB37 passed the Senate in early March. The tax is 56 percent of wholesale price. The bill does a better job at defining vapor products outside the tobacco category but doesn’t escape problematic taxation due to the reliance on price. For instance, a bundled or prefilled product would be taxed on the full value while devices sold separately would only pay the general sales tax. Revenue is allocated to the Electronic Cigarette Substance and Nicotine Product Tax Restricted Account to be spent on local health programs, cessation, and enforcement.

A budget amendment would introduce a tax of $0.066 per milliliter of liquid nicotine. Besides having updated its tax definitions to reflect the market, Virginia is also considering a specific excise tax at a relatively low level. Specific excise taxes are levied based on quantity such as weight or volume.

Specific taxes are not only the traditional way to levy excise taxes, they are also the best way to tax vapor products. Specific excise taxes are more neutral, more equitable, and more stable. By taxing the externality-creating part of the product (the aerosols created by the liquid), this tax interferes minimally in the market. It also guarantees that excise taxes on two similar products with different prices are the same (general sales taxes would still vary), which guarantees horizontal equitability—the idea that similar purchases or actions should be equally taxed. Lastly, specific taxes do not rely on price changes or consumer brand preference developments and hence can be more stable than price-based taxation. Revenue raised from this tax would be deposited in the Virginia Health Care Fund, but lawmakers would be well-advised to avoid relying on this revenue to fund broad-based government programs.

According to the backers of these proposals, new or higher taxes would reduce both youth and adult vaping. Research backs up this claim. A study that looked at the effect of vapor taxes in Minnesota concluded that 32,400 fewer people vaped as a result of the tax. Unfortunately, the 32,400 people who would have vaped if Minnesota did not have a high tax on vaping never quit smoking much more harmful cigarettes. Given that vapor products and cigarettes are economic substitutes, excise taxes on cigarettes become less effective when vapor products are also taxed. It is key that lawmakers consider this policy spillover effect when imposing taxes on vapor products.

In addition to the issues of levying taxes based on price, ignoring policy spillover, and using outdated tax definitions, a recent study of Canada’s menthol cigarette ban found no evidence suggesting that a flavor ban affected smoking uptake among youth, nor that it accelerated cessation by adults.

Conversely, there is evidence that punitive-level tax increases and bans risk fueling black markets and hurting public health. Both consequences would be in direct contradiction of these proposals’ stated goals.

While lawmakers are working through the design of vapor tax proposals, they must thread the needle between protecting adult smokers’ ability to switch and barring minors’ access to nicotine products. A good first step is creating appropriate definitions for the new nicotine products to avoid unintended disproportionate taxation based on design differences or bundling. This kind of disproportionate treatment happens when novel products are “forced” into old definitions. We can see this in Minnesota, where the tax is levied differently when the nicotine solution is mixed in-state versus when products are imported in their final consumable form.

For a complete guide to taxation of nicotine products, click here.