Americans are very generous people, and they give despite the reduced tax benefits of giving. That’s the takeaway from Giving USA’s latest annual report on the charitable contributions of individuals, corporations, and foundations. Altogether, Americans contributed nearly $450 billion to charitable causes in 2019. This is a record level of giving in nominal terms; adjusting for inflation, it is the second-highest amount ever after 2017.

Of the various donor types, individual donors were the most generous. They contributed about $310 billion to charitable causes in 2019, also a record amount in nominal terms. This was not supposed to happen according to many in the charitable community who predicted that the Tax Cuts and Jobs Act (TCJA) would lead to less charitable giving.

To be sure, a tax deduction may motivate some people but, contrary to our intuition, the data tends to show that charitable giving has increased as top tax rates have fallen and the personal cost of giving has gone up. You see, the value of a tax deduction depends upon the marginal tax rate by which it is taken. When the top marginal tax rate was 70 percent in 1980, a taxpayer saved $70 in taxes for every $100 they donated. The resulting “cost” of giving to them was $30 because the remainder was effectively charged to Uncle Sam. Today, the top marginal tax rate is 37 percent, so the personal cost of contributing $100 is $63, twice the cost of giving forty years ago.

This chart shows the changes to the top marginal tax rates for married couples since 1979 contrasted to the growth in charitable giving adjusted to today’s dollars. After a dramatic drop during the 1980s from 70 percent to 28 percent, the top individual tax rate has hovered between 35 percent and 39.6 percent for the past three decades. While tax rates have declined, we can see that charitable giving has more than doubled in real terms since 1979, from $129 billion to $310 billion today. There would seem to be an inverse correlation between tax rates and giving: lower rates mean increased giving. 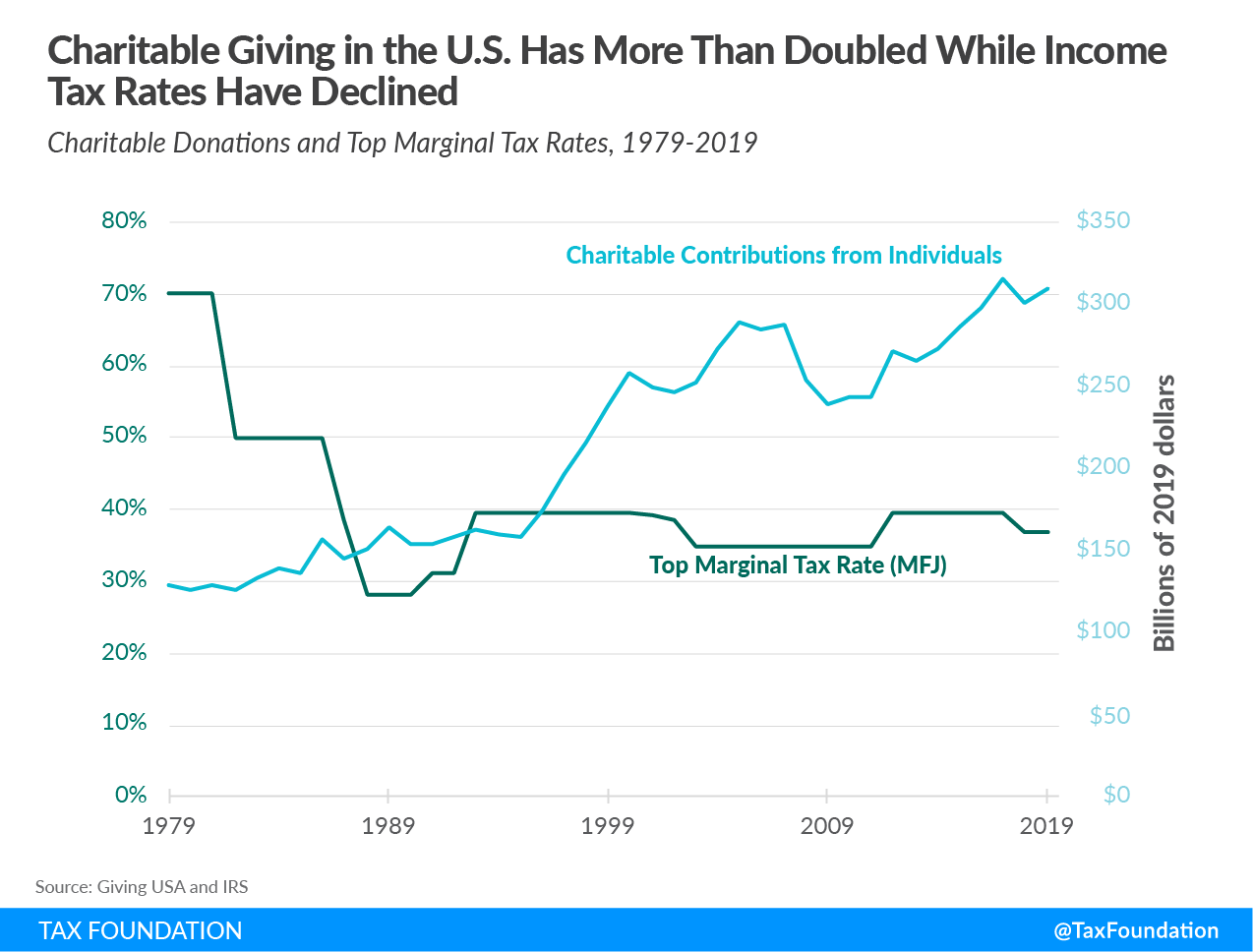 The Giving USA data does indicate that the TCJA did alter giving behavior at least in the short term as people tried to maximize their tax deductions while the top rate was 39.6 percent in 2017, in anticipation of lower rates in 2018. Indeed, the TCJA reduced the top marginal tax rate to 37 percent in 2018 and all the other tax brackets with it. And, of course, the standard deduction was expanded along with the rate cuts.

As the next chart shows, individual charitable donations jumped from $279 billion in 2016 to $302 billion in 2017, an 8 percent increase. (These figures are in nominal dollars.). Charitable contributions then dropped by 2 percent in 2018 to about $296 billion, indicating that some people may have pulled future donations back into 2017 to take advantage of the higher tax rates. Giving USA’s data for corporations shows a similar pattern as the corporate tax rate was reduced from 35 percent in 2017 to 21 percent in 2018.

What makes this even more noteworthy is to see the increase in charitable contributions in 2019, even with the lower tax rates and the dramatically smaller number of taxpayers who itemize their deductions. It indicates that people donate when they have more after-tax income and when the economy is strong, not when they are induced to do so because of the tax rate.

Of course, it is anyone’s guess how charitable Americans will be in 2020 as the economy goes through one of the biggest convulsions in decades. The record shows that giving tends to decline during each recession since 1980, although many of these economic events corresponded with changes in tax policy, such as 1981-1982, 1990-1991, and 2001-2002, so it would take more analysis to tease out cause and effect.

The Tax Foundation is a nonprofit 501(c)(3) charitable organization, so we are often asked our opinion of the charitable deduction. Some economists argue that if you give money to another person or organization, you should not be taxed on those gifted dollars—much like how alimony works. On the other hand, the wealthy benefit most from the charitable deduction so there is a question of fairness. Moreover, some of the biggest recipients of charitable contributions are universities and hospitals, which often behave more like for-profit entities than not-for-profits.

As the head of a nonprofit tax policy think tank, I don’t think it makes economic or moral sense to keep tax rates high just to induce people to be charitable. I think the economic harm of high tax rates outweighs the benefits of the charity it motivates—and one could argue that the economic harm of high tax rates causes some of the problems necessitating charity. Moreover, if civil society is so dependent upon the existence of the IRS, then we are not a very civil society. 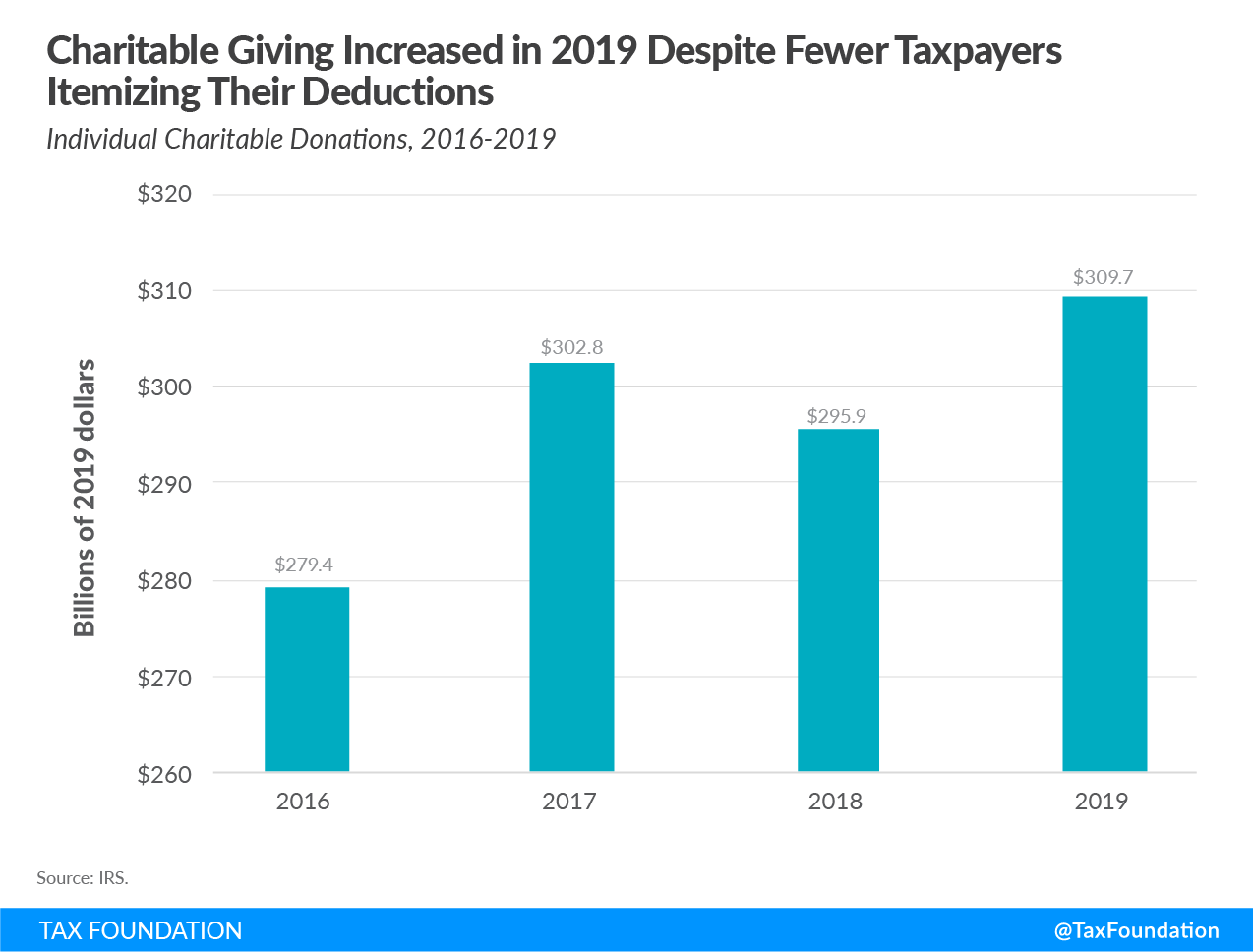